Physical characteristics of gunfire impulse noise and its attenuation by hearing protectors.

The peak sound pressure level (SPL), spreading of pressure wave and other physical characteristics of the impulse noise from weapons were studied in actual shooting conditions for assessment of gunfire noise exposure. Additionally, the attenuation of SPL by hearing protectors was measured with miniature microphones to evaluate protection efficiency in real shooting cond?ions. The peak SPLs at the shooter’s ear ranged from 132 dB (miniature rifle) to 183 dB (howitzer). The spectral content of the main part of the acoustic energy was less than 400 Hz (peak 16-100 Hz) for large-caliber weapons and 150-2,500 Hz (peak 900-1,500 Hz) for small-caliber weapons (rifles). The safe distances from the noise source (less than 140 dB peak SPL) were 50-200 m for large-caliber weapons. Rifle impulses (assault rifle, caliber 7.62) had a peak SPL of 154 dB at a distance of 4 m from the muzzle. The peak SP Ls of different explosives ranged from 125 to 185 dB at distances of 10 to 300 m. In rifle shooting, the attenuation efficiency of earplugs (16dB) or small-volume (thin) earmuffs (17 dB) was not sufficient and their use as sole protectors cannot be recommended. Instead, large-volume earmuffs should be used. Impulses from pistol and shotgun were fairly effectively attenuated both by small­volume and large-volume earmuffs. All kinds of earmuffs appeare<I to be ineffective (attenuation less than 15 dB) against impulses from large­caliber weapons with energy content at very low frequencies. Therefore, the combined use of earmuffs and earplugs is recommended for the most noisy operations. On the basis of the present data, wider safety zones were adopted in the Finish Defence Forces at shooting with different weapons.  (National Institute of Health)

This fiberglass composite is used in a diesel engine compartment located in the rear of a large motorhome. In addition to the noise reduction, the design engineers were pleased to have the heat barrier and fire protection that the noise blankets offered. These blankets are usually between 1″ and 2″ thick and have sewn perimeter edges as well as sewn penetrations. 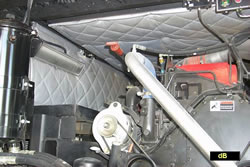 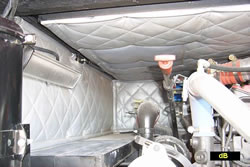 We took a common cardboard box, large enough for a ShopVac and lined with 2″ acoustical foam and placed a ventilation notch at the top with an oversized lid for ventilation.

Most front engine vehicles can have a significant reduction in noise that is transmitted through the fire wall by applying a decoupled barrier (1# per square foot) on the cabin side. Care should be taken that all penetrations are sealed so noise cannot “sneak” into the interior. 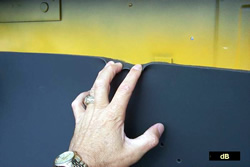 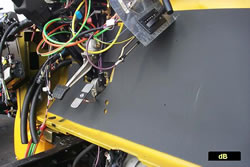 This unit has all the necessary design features to make an exceptional noise enclosure: 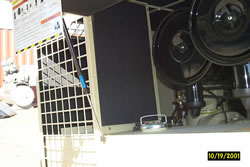 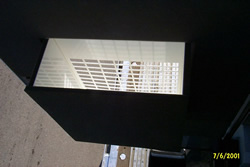 Embossed faced acoustical foam with damping was added to the inside of this speaker housing to eliminate the “tin can” echo that people heard on the outside. These units are used outside in fast food drive through order stations. 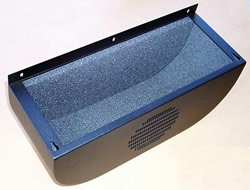 A manufacturer of hotel ice making machines requested a fast prototype noise kit made of 1/2″ thick embossed faced foam. Drawings were sent to dB Engineering by email and the parts were cut on a water jet table the next day. These parts were attached to the inside of the compressor housing using PSA (pressure sensitive adhesive). Significant noise reduction occurred at 1000 Hz and higher frequency bands. 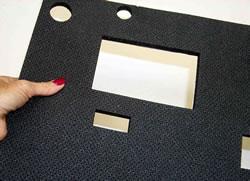 Leo L Beranek, 1914-2016
The Father of Modern Acoustics
We Help Our Customers Measure and Manage Noise in Their Products